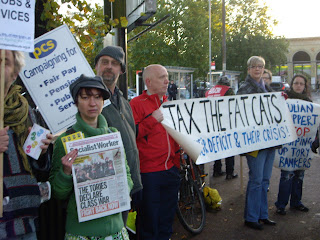 "George Osborne, supported by the Lib Dems, will announce a massive attack on our livelihood in order to pay back the rich. This will start as an attack on the public sector - both in terms of services and pay and conditions. However for every job lost in the public sector one will go in the private sector, for every £1 cut in wages or pensions it is a £1 less spent in the wider economy. It is wage cuts for the last 30 year that has compounded the slowdown of the economy. Anyone arguing for cuts backs, however slow, has no grasp of the capitalist economy. We need real investment now and we must fight with all our will. "

How to get involved

We meet up each month in person, to plan, discuss and formally agree our work. But we also use Facebook to talk through things informally. Click the button to go to our page.