Hundreds of workers and service users marched through the streets of Cambridge today to start a week of protests against the Cambridgeshire Country Council and Cambridge City Council budget cuts.  Both Council have meeting this week at which they are expected to make deep cuts in public services.  The Cambridgeshire Against the Cuts demonstration was calling for councillors to reject the spending cuts and set a needs based budget. 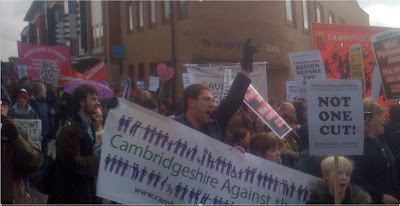 Join the Lobby of the County Council :
Shire Hall, 8am Tuesday 15th February

How to get involved

We meet up each month in person, to plan, discuss and formally agree our work. But we also use Facebook to talk through things informally. Click the button to go to our page.